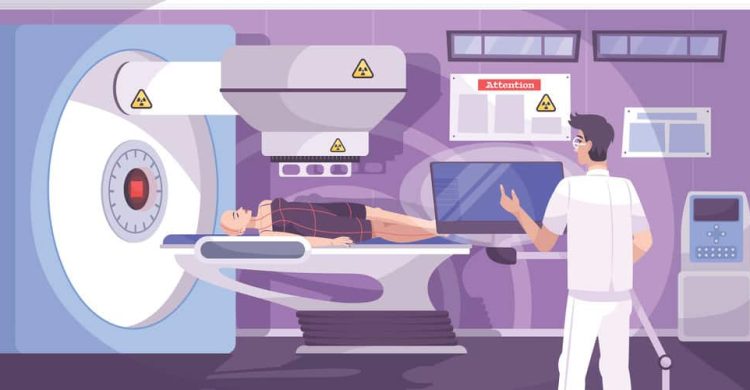 Due to how challenging cancer treatment is, scientists and physicians always look for innovative techniques to treat this debilitating disease.

One of the problems we face in cancer therapy is the principle of targeting. You see, chemotherapy is highly effective at destroying growing cells rapidly.

However, its major defect is that it doesn’t distinguish between healthy and cancer cells. For this reason, we always had to deal with serious side effects accompanying cancer treatment.

One of the fields that relatively managed to escape this loophole is radiation therapy.

We significantly reduced these side effects by developing advanced machines to target the tumor regardless of its location inside the body.

Our previous articles covered how cancer can be treated with tumor removal and chemotherapy. Now, it’s time to talk about radiation therapy.

What is radiation therapy?

Radiation therapy involves the use of external radiation beams to kill cancer cells. It is a highly targeted therapy that could destroy the DNA of cancer cells to eradicate them.

According to the National Institute of Cancer, 50% of patients diagnosed with cancer will undergo radiation therapy.

Note that radiation therapy doesn’t immediately kill cancer cells. Instead, it will take weeks before their DNA is damaged and the cells die.

Radiation therapy is usually combined with chemotherapy and surgical oncology to eradicate cancer from the body completely.

Radiation therapy is used to treat patients with cancer or reduce their symptoms. It can also kill any remaining cancerous cells after performing the surgical removal of the tumor.

You might be asking yourself, “if the radiation is capable of killing cancer cells, wouldn’t it also kill normal cells?”

The answer is yes. However, the damage inflicted on normal cells is minimal and quickly regenerated.

Moreover, with the advancement of radiation oncology, physicians can specifically target one small area of the body to hit it with a radiation beam.

Before getting approved for radiation therapy, there is a lengthy testing and evaluation process, as not all patients may benefit from this treatment.

The procedure of radiation therapy

Radiation therapy is usually programmed five days a week. The patient will be off therapy during the weekend to give the normal cells to regenerate.

Each treatment session takes between 10-30 minutes.

Once you arrive at the radiation center, the radiotherapy team will position you on a table. Some protective shields might be used to reduce the exposure of other areas to radiation.

The machine that delivers the radiation beams is called a linear accelerator. This is because it points the beams at a specific location of your body and moves to change angles to avoid exposing a single part of the skin to the beams.

After a few sessions, your physician will closely monitor how your body responds to treatment.

Some imaging tests might be ordered to observe the tumor response to treatment.

Your physician will adjust your dose and treatment sessions depending on how you respond to therapy.

Do not hesitate to contact Hayatmed for a free consultation to get more information about your case.

Despite the type of cancer, radiation therapy is known to cause general fatigue and hair loss in the area exposed to therapy.

Here are some of the most common side effects:

While not typically seen in all patients, nausea and vomiting are especially prevalent in patients who get radiation therapy to their abdomen or a central nervous system structure that controls these reactions, such as the inner ear and vestibular system.

This is usually due to non-targeted infused beams that damage the epithelial lining of the oral cavity. Esophageal sores can also occur if the treatment is targeted to the neck.

Patients might start to complain about the inability to ingest food. Support therapy and fluids might be a good option for this subset of patients.

Radiation beams will induce inflammation in the targeted area, especially at the soft tissue level.

This can pose a problem if the swelling occurs inside the brain when treating cerebral tumors.

As you may know, the brain is confined by the skull, and any extra pressure may lead to intracranial hypertension and a life-threatening condition known as brain herniation.

Even though radiation therapy is targeted to reach peak intensity at the level of the tumor, the skin is still affected and can show these symptoms:

This sign depends on the dose of radiation you receive. If the dose is low, hair loss might be reversible.

However, hair loss is typically irreversible if it exceeds 10 Gy (unit to measure radiation beams) in one dose.

Because radiation therapy induces inflammation, scar tissue starts to deposit after the activation of fibroblasts.

This could make the affected area less elastic.

Radiation therapy has been documented to cause cognitive decline in brain tumor patients, and the beams are pointed at their skulls.

Radiation therapy is a great technique to target some tissues without invasive procedures, such as surgery.

Over time, this technique has become more efficient than ever, where an entire medical subspecialty is dedicated to treating cancer patients with radiotherapy.

If you have questions about radiation therapy, please ask them in the comment section below.

Don’t forget to check our other articles about chemotherapy and Tumor Removal Surgery.